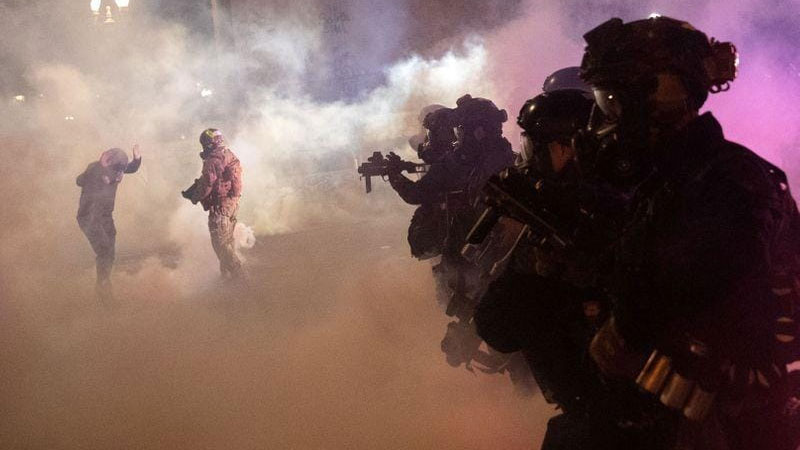 Police in Portland on Thursday took over security at a courthouse from federal agents as President Donald Trump threatened to send in National Guard to end weeks of clashes between police and anti-racist protesters.

Oregon State Police on Thursday night moved ahead with plans to guard the courthouse that has been the focus of nightly battles between activists and federal agents, a day after Oregon’s governor and US officials announced a withdrawal deal.

Trump said Governor Kate Brown was not doing enough to rein in the demonstrators protesting racial inequality and police violence, who he labeled “Anarchists &amp; Agitators.” Trump said federal forces would remain on standby to see if state police could protect the federal courthouse.

“If they don’t do it we will send in the National Guard and we’ll take care of it,” Trump told a White House news briefing. “They’re working today and probably tomorrow to clean out this beehive of terrorists.”

Brown responded that Trump’s call to “dominate” protesters in American cities had failed in Portland, referring to an announcement the president made in a June 1 speech as police used gas and batons on a Washington, D.C., demonstration.

“Today, federal troops are preparing to leave downtown Portland,” she tweeted on Thursday.

The US Department of Homeland Security deployed tactical agents to patrol the city’s courthouse in early July after people set fires inside the building, broke windows and graffitied its walls.

Their presence drew national attention after agents were videoed snatching a protester off the street and whisking him away in an unmarked minivan. Democrats and civil rights groups said officers were acting as an unconstitutional force and committing civil rights violations. On Thursday, the Washington Post reported the Department of Homeland Security compiled “intelligence reports” on journalists covering the Portland protests. DHS did not immediately respond to a request for comment.