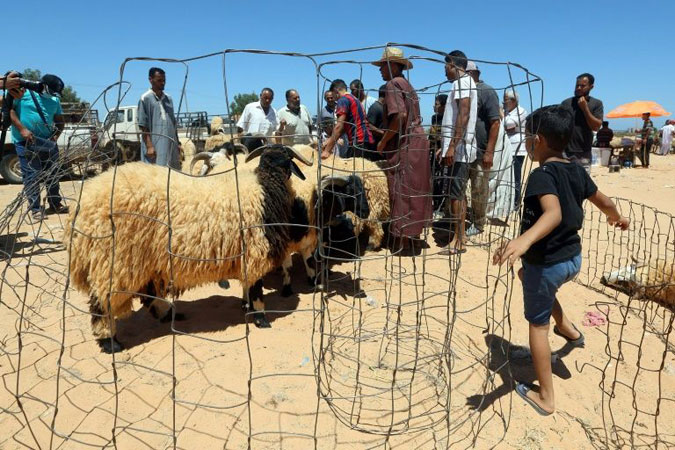 Worn down by conflict, poverty and the pandemic, many Libyans are gloomy this year on the eve of the holy Muslim Feast of Sacrifice, or Eid al-Adha. A usually bustling annual sheep market on the outskirts of the capital Tripoli lies largely deserted, lambs bleating in their wire-mesh pens with few customers in sight. A handful of potential buyers eye the sacrificial animals, their makeshift enclosures partially shaded against the blazing summer sun, in the suburb of Tajoura.

Breeder Suleiman Ertel got up long before dawn to bring his livestock from his hometown of Zliten, about 140 kilometres (90 miles) away, to the biggest animal market in western Libya.

For Muslims, the festival honours Abraham’s willingness to sacrifice his son as an act of obedience to God, who then intervened and provided a sacrificial lamb instead. The faithful commemorate this by ritually sacrificing an animal — a sheep, goat, cow or even a camel — and dividing it into three parts; for the poor, for relatives and for the home.

“Usually, in the days before the festival, people rush to buy their sheep,” Ertel said, his eyes scanning the dusty three-square-kilometre (one square mile) expanse.

But this year high livestock prices, a pandemic-driven fear of crowded markets, a financial crisis and heightened insecurity in Libya itself have all kept customers away.

For livestock farmers like him, Ertel said, “everything is more expensive. Fodder has doubled in price, but also transport costs between towns, because of insecurity on some routes.

The frugal and downbeat festival comes as Libya has endured almost a decade of violent chaos since the 2011 NATO-backed uprising that toppled and killed veteran dictator Moamer Kadhafi.

Tripoli, seat of the UN-recognised Government of National Accord (GNA), was besieged until several months ago by forces loyal to eastern-based strongman Khalifa Haftar, and the battlefront has since moved to central Libya. The war, involving foreign mercenary forces, fighter jets and drones paid for by multiple outside actors, has taken a heavy human toll but also battered the oil-dependent economy. The war-weary country is also plagued by water shortages and power blackouts that hobble air-conditioners and also make it impossible to store meat in freezers. The deplorable situation is compounded by the COVID-19 crisis, which has depressed global oil prices. The virus itself has flared again in Libya despite curfews, the closure of schools and mosques, and a travel ban.