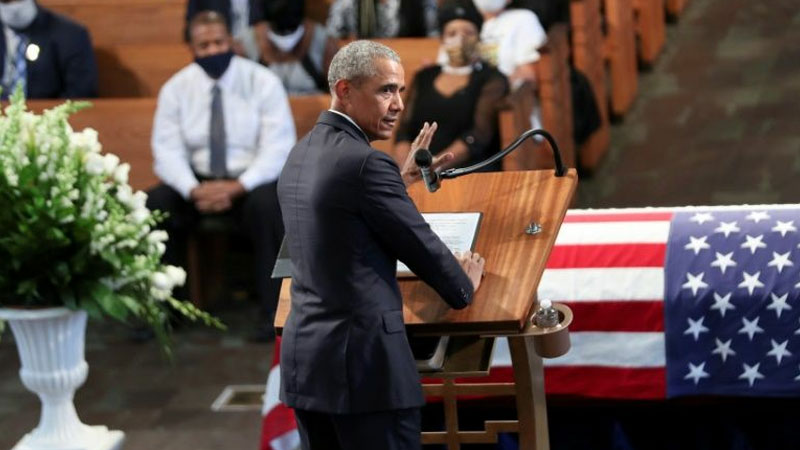 Former US leader Barack Obama launched his sharpest attack to date on President Donald Trump on Thursday, condemning the use of federal agents against protesters and attempts at voter suppression.

“Today we witness with our own eyes, police officers kneeling on the necks of black Americans,” Obama said in a fiery eulogy at the emotional funeral service in Atlanta of civil rights leader John Lewis.

“We can witness our federal government sending agents to use tear gas and batons against peaceful demonstrators,” the former president said. Obama did not mention Trump by name but he was clearly referencing moves by the Republican president, who used troops to clear protestors from Lafayette Square outside the White House and sent federal agents to put down demonstrations in Portland, Oregon. Obama also took a jab at alleged Republican attempts to suppress the minority vote and Trump’s repeated attacks on mail-in voting less than 100 days ahead of the November contest against Democrat Joe Biden.

“Even as we sit here, there are those in power who are doing their darnedest to discourage people from voting by closing polling locations and targeting minorities and students with restrictive ID laws and attacking our voting rights with surgical precision, even undermining the postal service in the run-up to an election that’s going to be dependent on mail-in ballots so people don’t get sick,” he said.

Trump launched another broadside on Thursday against mail-in voting, which is expected to play a prominent role in November’s election because of the coronavirus outbreak.

“With Universal Mail-In Voting (not Absentee Voting, which is good), 2020 will be the most INACCURATE & FRAUDULENT Election in history,” Trump said. “It will be a great embarrassment to the USA. Delay the Election until people can properly, securely and safely vote???”

Paying tribute to Lewis, who died on July 17 at the age of 80, Obama said the congressman’s lifelong fight for African-Americans’ civil rights had paved the way for him to become America’s first black president.

Lewis, a 17-term Democratic congressman from Georgia, did “everything he could to preserve this democracy and as long as we have breath in our bodies, we have to continue his cause,” Obama said.

“As long as young people are protesting in the streets hoping real change takes hold, I’m hopeful,” he said. “But we can’t casually abandon them at the ballot box. Not when few elections have been as urgent on so many levels as this one.” Lewis’ funeral service was also attended by former presidents Bill Clinton and George W. Bush and House speaker Nancy Pelosi.

Former president Jimmy Carter, 95, was unable to attend but sent a letter which was read out to the mourners in the Ebenezer Baptist Church, where Martin Luther King Jr served as pastor in the 1960s.

“His enormous contributions will continue to be an inspiration for generations to come,” Carter wrote.

Bush, a Republican, said he had his “differences” with Lewis, a Democratic stalwart, but “we live in a better and nobler country today because of John Lewis.” “He believed in humanity and he believed in America,” Bush said.

In his tribute, Clinton referenced a column that Lewis wrote to be published in The New York Times on the day of his funeral service.

“Though I may not be here with you, I urge you to answer the highest calling of your heart and stand up for what you truly believe,” Lewis wrote.

“So I say to you, walk with the wind, brothers and sisters, and let the spirit of peace and the power of everlasting love be your guide.”

“It is so fitting that on the day of his service he leaves us our marching orders,” Clinton said. “I suggest we salute, suit up and march on.”

Before Thursday’s funeral, Lewis’ body lay in state at the US Capitol, a rarely bestowed honor, so Americans could pay their final respects.

On Sunday, a lone caisson carried Lewis’ body across the Alabama bridge where in 1965 a policeman fractured his skull during a protest that helped forge his reputation as a fearless civil rights leader.

Lewis’ death came in a year during which “Black Lives Matter” protests against police brutality have brought thousands onto US streets, underscoring the still-raw depths of the country’s racial history.

Lewis grew up in the Alabama city of Troy. His parents were sharecroppers, and he once worked in a cotton field. While attending segregated schools, Lewis was inspired by the peaceful protests of civil rights leaders like Martin Luther King.