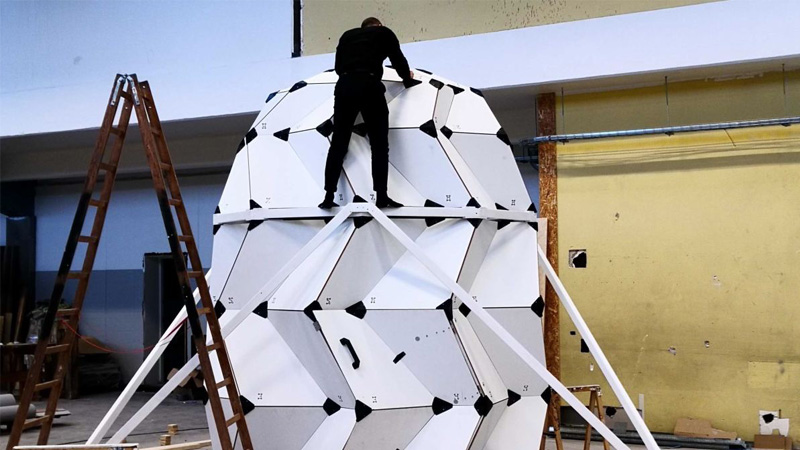 With NASA determined to return humans to the Moon in 2024 through its Artemis program, many are turning their attention to the habitats that will house this next generation of explorers. Among them is Danish design duo Sebastian Aristotelis and Karl-Johan Sørensen, who have been busy developing a self-expanding lunar module they plan on putting to the test in the harsh environment of Northern
Greenland.

Like another example of a Moon shelter we looked at back in 2018, the newly revealed Lunark is inspired by the art of origami. While the idea of the astronauts piecing together a habitat on the Moon has its own appeal, in reality the low-gravity environment and clunky spacesuit attire are likely to pose more than a few problems when it comes to construction.

Habitats that assemble themselves are therefore a more feasible proposition, at least for the initial settlers. The Lunark is designed for easy transport to the Moon, using a compact aluminum frame promised to be lightweight and strong, that lands on the surface with furniture, water and resources inside before expanding to its final size.

Fitted to the aluminum frame are 328 individual panels weaved together with an airtight flexible seam. This helps create an exterior “like a tank,” while the inside features a few thoughtful touches to keep things interesting and homely for the inhabitants. These include soundproofed crew cabins for privacy, along with circadian light panels to mimic varying weather and daylight cycles to help them maintain healthy circadian rhythms.

The habitat also features a weather simulator that can use these panels and speakers to recreate storms, sunny mornings or rainy afternoons as a way of breaking up the monotony of life in space. Also onboard is an algae reactor to provide nutrients, solar panels to keep the batteries charged, a vertical garden to grow fresh greens, and a 3D printer for on-the-spot repairs.

As the design practice SAGA Space Architects, Aristotelis and Sørensen have been busy finalizing the blueprints and building prototypes of their Lunark habitat, and are now ready to construct a proper version. The module is designed to house two people, and the pair plan on putting this to the test in a real-world environment later this year, with a three-month stint planned for Northern Greenland.

The reasoning behind this is that the inhospitable nature of the region should give the Lunark module a proper kicking of the tires, with the pair expecting hurricane-force winds and temperatures of – 30 °C (-22 °F). This simulated Moon mission will see the pair live in complete solitude, with the lessons learned to hopefully help guide lunar habitat designs in the future.

For this to go ahead, however, SAGA Space Architects is raising funds to build a full-scale version of the Lunark, and have turned to Kickstarter in pursuit of this aim. It is offering a range of rewards for pledges of different levels, including live Q&A sessions, virtual parties, and the ability to have your name emblazoned on the supporter’s wall inside.